Stevens Puppets tours fully-staged productions of fairy-tales and classic children’s literature, featuring hand-carved wooden marionettes in front of colorfully hand-painted scenery. The charming puppets come alive in their miniature worlds, transporting their audiences through magical journeys of endearing stories, raucous laughter, and artistic beauty. The puppeteers give life to their little actors, weaving a spell of childhood over audiences of all ages, as they invite everyone along for a trip through “once upon a time.” Stevens Puppets was founded in 1933 by the Peabody Award winning Martin Stevens, preeminent American puppeteer and founder of the Puppeteers of America.  With his wife, Margi, Mr. Stevens created ground-breaking touring marionette shows which are featured in books, in museums, and on tour. Mr. Stevens’ marionettes and stage design have influenced generations of puppeteers in America and abroad, often cited as artistic benchmarks and industry standards. Dan and Zan Raynor, the owners, have been with Stevens Puppets for over 20 years, each coming from live theatre backgrounds of acting and directing professionally. Dan holds a Bachelor of Arts degree in Theatre and Zan holds a Master of Theology with a doctorate in Canon Law. Dan has taught theatre at the Northwest Arkansas Academy of Fine Arts and directed professionally for theatres in several states, including televised events in California. He has performed with and directed many professional musicians like Neil Young and Huey Lewis, as well as acting professionally with many theatre companies in California. In addition to performing on stage as an actor and dancer, Zan has directed high school and college theatre programs, as well as designing lights, costumes, and choreography for numerous theatre companies in the Midwest and Northeast.  Zan has taught every level of school, from Montessori preschool through University classes. She has been a high school principal as well as theatre and Latin teacher. They divide their time between studio artwork, both original and restoration, training other performing artists, managing complex tours, and performing themselves all around the country at schools, libraries, festivals, and fairs. 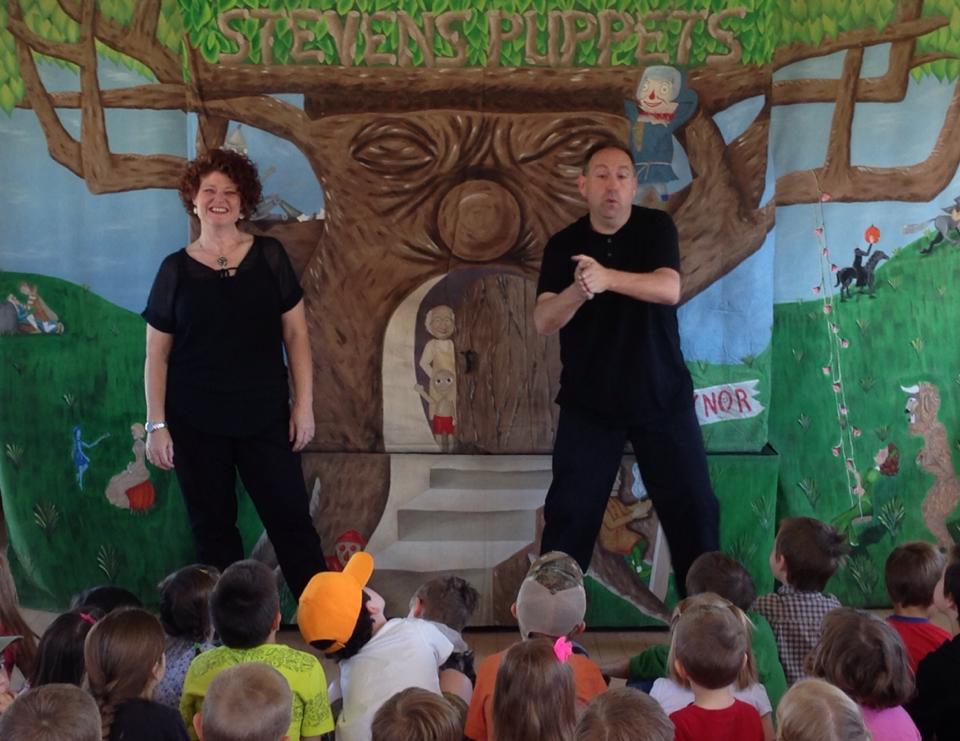 Mindful that they are stewards of this important legacy, Dan and Zan Raynor lovingly restore the original Stevens’ productions, ensuring that future generations continue to enjoy these historic treasures. They also create new productions of classic stories with hand-carved casts of characters in the tradition of the master and manage tours throughout the country performed by puppeteers they have personally chosen and apprenticed. Dan and Zan have recently completed the restorations of “The Sleeping Beauty”, Rumplestiltskin”, “The Legend of Sleepy Hollow”, “Aladdin”, and “The Wizard of Oz”. These marionette plays feature Martin and Margi Stevens’ original puppets, Margi’s period costumes, the Stevens’ hand painted scenery, all lovingly and authentically restored or re-created by Zan and Dan Raynor. Fun fact. The “fly-apart” marionette of Rumplestiltskin was the first of its kind, an original innovation of Martin Stevens and a keystone of his company’s patrimony.
In February 2018, Zan began writing the script for the first new marionette show since 1999, “Goldilocks and the Three Bears”. In February 2019 she completed the artwork for the show and it happily joined the lineup of touring shows.